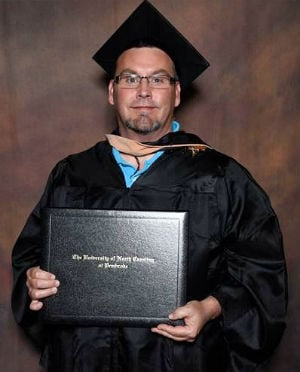 We wouldn't have blamed Robert Davis if he'd decided to quit school. No one would have. He faced more challenges than what could be deemed fair. But he didn't give up. He pressed on even when his health was failing, when he went through a divorce and became a single parent, and when money ran low.

He had every reason to give up. But he had an important reason to keep going -- providing a better life for his kids.

"The goal was to better my family and me," he said. "That was my intention for the whole thing. It wasn't for us to live poor forever; it was to make a better life."

Despite undergoing seven surgeries in three years and becoming a single father of two, Davis earned three degrees back-to-back-to-back -- two of them online.

"Before then, I had only done menial jobs. I knew I was too smart for that, but I did what I had to do," Davis said. "So when the opportunity came to go back to school, I took it."

He started with an associate degree at Southeastern Community College in Whiteville, North Carolina, where he lives. He then transferred to the University of North Carolina Pembroke, earning his bachelor's degree in business management online. He kept going.

"The week I finished my bachelor's, my advisor, who was also the Dean of Business, came to me and said, 'Robert, we just put the MBA online, and I would really like to see you finish that too.'"

So he did. Davis graduated from the UNCP online MBA program in May 2018.

Davis attributes his success in school in large part to his network of friends and family who helped him keep going. In fact, if it hadn't been for his son, he might not have finished the MBA program.

"When my wife left, I was scared I was going to have to quit school," he said. "But my son, Justin, who was 23 at the time, had just gotten a really good job. He came up to me, and he put his arm around me. He looked at me and he said, 'Daddy, Tori needs you right now.'

"Victoria, we call her Tori, is my daughter; she's 12 now. And my son said, 'I got a good job, I'll pay the bills, and you take care of Tori, and you finish school. That's what I want for you.' So as long as I had my children's support, it didn't make any difference about anyone else."

Davis, who adopted Tori when she was just two days old, walked across the graduation stage while both children, his mother, his aunt and two of his son's friends cheered him on.

"I could have given up, I could have quit, but I think about what my son did, and that just gave me the extra incentive knowing I was doing the right thing," Davis said. "And so when I walked across that stage, it was an accumulation of my kids, my family and my church being there for me the last few years. Other than the birth of my children, that's the most proud I've ever been because it was an accomplishment that I did, but I did it with the backing of my family and friends.

"I wasn't going to miss this graduation. I'd have gotten on my hands and knees and crawled there if I had to." 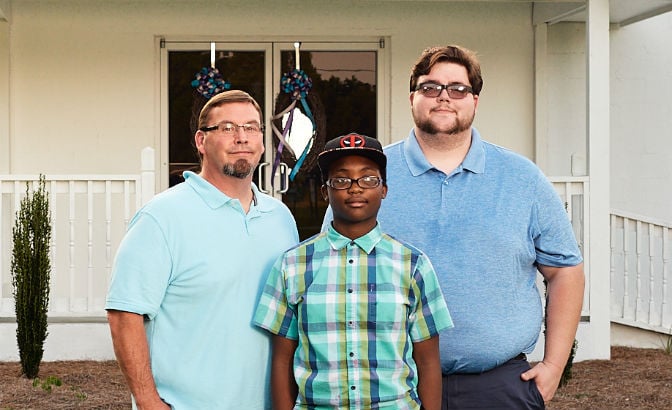 Robert with his two kids, Tori and Justin

Davis, who is working toward becoming a college instructor, chose online programs for his bachelor's and master's degrees because of the flexibility they afforded him during difficult times.

"After talking to the advisors, I decided UNCP was the best fit for me," Davis said. "Because I was a single parent, I didn't have the ability to drive there every day to go to school. So online was a necessity."

Despite being the closest university to Davis's town, UNCP wasn't quite close enough for Davis to attend campus on a regular basis.

As an online student, Davis did have resources available to him through UNCP, but rarely needed them for the MBA program.

"The resources were available, because when I was in my bachelor's, I used the tutoring services," he said. "It seemed like the MBA was so straight forward that I really did not have to use resources. They were there, and I did use library resources when I would do papers. So I utilized that online to get the information I needed."

After graduation, Davis was also able to make use of some university-provided services.

"The career center helped me get my resume and cover letter together the way we felt should be put together," he said. 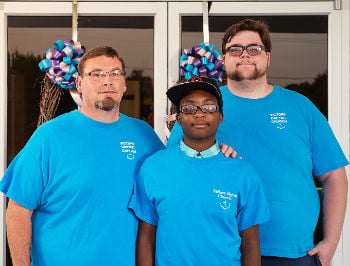 Robert, Tori and Justin at church

As someone who fought hard for his educational opportunities, Davis has some valuable insight to share for others considering the online MBA program an UNCP.

"I prefer online, but you also have to make sure that you're disciplined and you can't procrastinate. If you've got that type of mentality, online is not for you."

Davis learned about procrastination the hard way in one of his courses.

The projects Davis had in his courses included quizzes, tests, research papers and recorded presentations.

Davis advises online students to schedule a certain amount of time each week that is dedicated to coursework.

"Things always come up, but make sure that you have time set aside every week, no matter what, to do the work."

Not surprisingly, Davis also suggests students have the support of their friends and family.

"A good support network is important," he said. "It's one of the best motivating factors you can have."

Have a question or concern about this article? Please contact us.